As a writer, Google Maps Street View has become my best friend. In a scene from my currebnt romantic suspense, DUSK, my heroine was walking across Tower Bridge in London, where she needed to look up at the overhead tourist walkway linking the two towers. There was always the option of purchasing an airline ticket to London, hopping on the Underground, and walking halfway across the bridge so that I could see what she would see. Or, there was the less expensive alternative of Google Maps Street View.

I have repeatedly used this tool in writing. Not always for something as extravagant as a romp across the pond. I've used it for nearby intersections, admittedly people-watching. There are times where I need to see public buildings from a three-dimensional perspective.  What do my characters see when they cross a specific street? If my muse isn't cooperating these 'visuals' assist.

Alas, I sometimes digress. It has become an obsessive game (flagrant waste of time) to try and spot the Google car in window reflections. 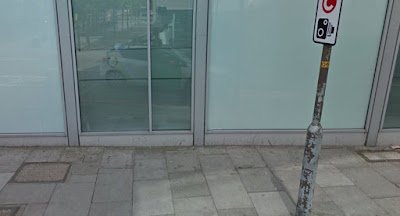 Then there is Maureen, the adventurer, who has visited the base camp at Mount Everest, walked across Sydney Harbor, and stood on top of Table Mountain in Capetown. Yes, I get addicted to traveling via this technology.

Sometimes as writers we have to be resourceful. We can't always hop on a plane and visit every country our eccentric characters want to take us to. I have even started tinkering with Google Cardboard for a complete virtual experience!

Are any of you Google Street View addicts?

The BLUE-LINK series are all standalone books 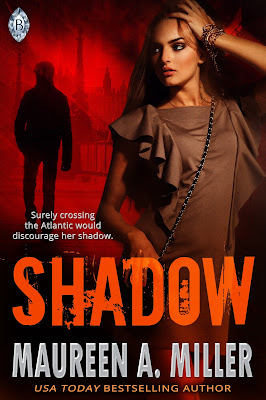 Sophie Diem's boss has skipped town, abandoning their counseling firm and taking her investment money with him. As she seeks to rebuild her professional career she is distressed by the appearance of a stranger. The man keeps to the shadows, but he is definitely stalking her. In an attempt to flee him she accepts a job offer...in London. Surely crossing the Atlantic would be enough to deter her Shadow.

Glenn Barber is a desperate man. He sorely wants answers. The man that can supply them has gone missing, though. Now all Glenn can do is go after the next best thing, the man's former employee, Sophie Diem.

Sophie is shocked to spot her shadow in London. What she learns is that Glenn, the Shadow, is not a stalker, but rather her only protection. As her attraction to Glenn grows, together they conspire to locate her former boss and stop him before he can harm others.

"The sexual tension with Sophie and The Shadow was off the charts. Overall, the book had it all: romance, suspense and humor."

"I loved this book. The characters were strong and the suspense was just right." 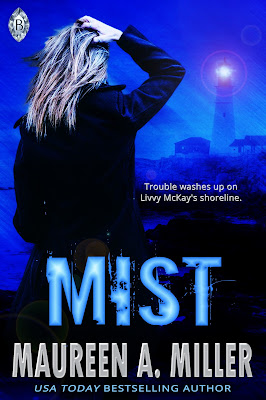 A mysterious footlocker washes up on Livvy McKay's shore. Minutes after recovering it she is assaulted by an intruder. Wounded and unable to give chase, she is startled by a knock at the front door. A stranger is looking to rent a boat from her business, McKAY'S CHARTERS. Livvy doesn't believe in coincidences. Especially when the stranger is wearing black−just like her assailant.

Jack Morell is a desperate man. After receiving a cryptic phone call from his uncle−a call spiked with the sound of gunfire in the background, he is frantic to locate his uncle's missing ship. Warned to use discretion, Jack opts to rent a boat from McKAY'S CHARTERS for his search.

Together, Jack and Livvy uncover the contents of the footlocker and now they are being hunted.

Someone doesn't want the world to know what is in that trunk. Someone who is well-connected.


Unable to trust the authorities, Jack and Livvy have only each other. Will it be enough to survive the Atlantic's frigid clutch? 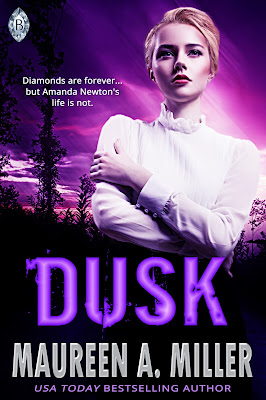 As a young girl, Amanda Newton witnessed the brutal murder of her parents. As an adult she is targeted by their murderer.

Beautiful. Reserved. Mysterious. Amanda Newton, the CEO of BLUE-LINK epitomizes control with her adept handling of the global company. But that control is threatened with a series of attacks against her.

Ray Gordon, a former Navy SEAL is looking to open his own security firm. One more contracting job with BLUE-LINK would complete the funding. When he is hired to protect Amanda Newton, the Ice Queen herself, he never bargained on falling for her.

Amanda has something her attacker wants. He has waited over twenty years to claim it, and he will destroy anyone close to her to get it.

...but he's met his match in Ray Gordon.

Find out more about Maureen at www.MaureenAMiller.com

I've googled a lot but dumb me has never used Google Street View--until today after reading your blog. Of course it might be more fun to hop on that airplane. bit more expensive though.

LOL. So true, Elise. Another factor is the time. By the time I flew and got myself to that bridge, I'd forget what I was going there for.

As technically challenged as I am, I'm proud to say I did use Google Street View once or twice, just like a big girl. It's been a while though> Hmm, wonder if I can remember how to do it?.

I love Google maps. Before them I used weather maps.

Maureen, congrats on your upcoming release! Dusk looks like fun--in a suspenseful kind of way. I've used Google Street View. Is it weird that it makes me feel a little like a voyeur?

Michelle, I feel that way on Facebook. Not to worry!

Yay Jean! But I agree about being technically challenged!

Thanks Marcelle! I feel the same way. But imagine how the guy driving the Google car must feel!

Love google maps! Such a great resource. (And scary, too!) LOL