Say No To Crab Racing!

Last week I went to New Orleans for hubby's business. His company hosted a big gala. It was nice to be wined and dined for a few days, but it was certainly filled with oddities...such as this woman. (No, not me, the one wearing an Aztec temple.) 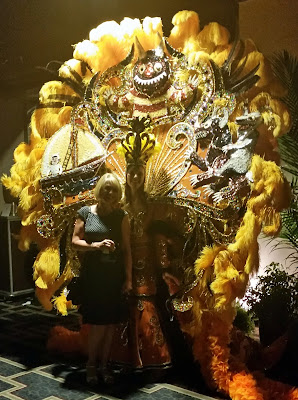 Another oddity was this statue. I'm not quite sure what to say about this. 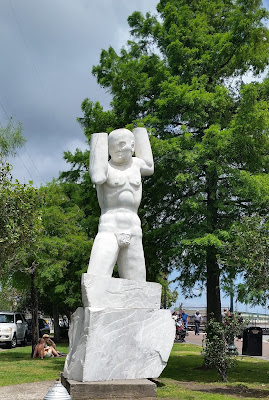 At night we visited a conference room lined with bizarre kiosks. One contained "crab racing". A pile of crabs sat in the middle of a pen, and to me they appeared to all be dead. I pointed that out to the host. He said, "They're not dead, they're sleeping." And he proceeds to jab at them with a stick. One raised his claws in protest, but he sure as heck didn't 'race'.  I was ready to go out on the street with a FREE THE CRABS poster. The next exhibit was "pose with a live alligator". I felt like I was in some sort of Chevy Chase Vacation movie. 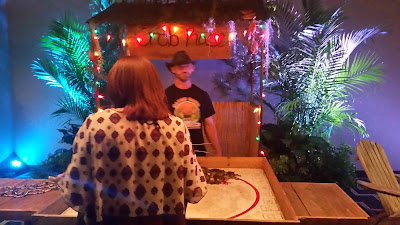 On our second night of conferences we entered a darkened chamber, and out of the shadows came this powerhouse! It was a tad surreal to be assaulted with such loud noise without actually being able to see the source. But having origins in marching band myself I had to give them a fist pump of respect.

What does all this have to do with my new book? Nothing. But, at least I can say no crabs or alligators were harmed in the writing of DUSK. :)

Writers know that conferences can be a tad surreal. Have you been to any conferences outside the writing industry? 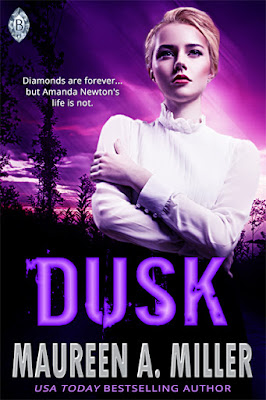 As a young girl, Amanda Newton witnessed the brutal murder of her parents.

As an adult she is targeted by their murderer.

Beautiful. reserved. mysterious. Amanda Newton, the CEO of BLUE-LINK epitomizes control with her adept handling of the global company. But that control is threatened with a series of attacks against her.

Ray Gordon, a former Navy SEAL is looking to open his own security firm. One more contracting job with BLUE-LINK would complete the funding. When he is hired to protect the ice queen herself, he never bargained on falling for her.

Amanda has something her attacker wants, and he will destroy anyone close to her to convince her to relinquish it.

...but he's met his match in Ray Gordon.

Man, I am going to the wrong kind of conferences.

It really was bizarre. But, I guess that's New Orleans. At one point they had the police shut down the block around the hotel so that the attendees could have a parade around the block. I'm sure there might have been alcohol involved. :)

A very "interesting" conference. I have attended a few but nothing that adventuresome. Looking forward to DUSK!

Super Congrats on the new book. My experience with NOLA was living there a very long time ago. It is tame now in comparison. Still quite its own world. And like Amanda I've been going to the wrong conferences.

Happy to see you here, Joan! Thank you so much for popping in!

What a crazy time! And it looks like a fabulous book. Love the cover. (And I'm so glad you weren't attacked by any alligators or crabs. LOL)

Would love to see a photo of you with a "Free the Crabs" sign. Actually that could apply to a few people. Loved the blog, Maureen.

Thanks Anne Marie. I have to admit we had some strange dreams those couple of nights. But I could blame those on the spicy food. :)

Thanks so much, Elise. It would be my luck that I'd end up on the local news as some sort of crab advocate. I'm sure they have my picture up on the set of DEADLIEST CATCH with a WARNING sign beneath it. LOL

Sorry your New Orleans experience was so bizarre, Maureen. I love the place! Most moving thing I experienced last time there--about 5 Decembers ago--was a concert in St. Louis' Cathedral at Jackson Square. The choral director asked that everyone who wasn't a local to please raise their hands. We all did--about half the audience--and the m.c. called for a round of applause. N.O. was still hurting from Katrina then. Hope that hurt has largely disappeared.

Thanks Jean. It sounds like you had a beautiful experience. We took a steamboat cruise and I just couldn't help but marveling at the fact that we were higher on the river than the shoreline. No wonder it was a recipe for disaster.