Thank you to Wynter for hosting me here at Not Your Usual Suspects today! Since this blog has mystery and romantic suspense authors I thought it would be fun to talk about kick ass heroines in the romantic suspense genre.
1. The first book that came to mind is Cry No More by Linda Howard. I read this book long before I even knew I wanted to be a writer and the determination of the heroine has stuck with me all these years. Mila Edge, the heroine of the story doesn’t have any law enforcement or military training and she’s not an expert in martial arts, but she is a woman on a mission. Someone kidnapped her child when he was an infant and the lengths she goes to in searching for him are nothing short of amazing. This book is definitely a romance but it’s also about a woman’s struggles to find answers and to find her son.
2. The next heroine I really dig is FBI Special Agent Monica Davenport from Cynthia Eden’s Deadly Fear. She gets inside the minds of serial killers and brings them to justice. After being kidnapped by one when she was just a child she came through hell and ended up helping people even after all her trauma.
3. Sonora ‘Sonny’ Vasquez from Jill Sorenson’s Crash Into Me is another kick ass FBI agent who deserves a mention. Sorenson’s books have an edgy, gritty flavor to them and her characters tend to have real flaws and real problems. Sonny is no different. After overcoming a craptastic childhood she goes on to hold her own in a male-dominated career.
4. Lieutenant Eve Dallas from J.D. Robb’s futuristic In Death series. I’d be remiss if I didn’t mention Eve. She’s the perfect romantic suspense heroine. Tough and gritty, she overcame a really bad past and if you commit a crime in her city, you better pray she’s not the cop on your case. In addition to her all awesomeness, she manages to balance being married to sexy billionaire Roarke (who wouldn’t?) and all of the social obligations, etc. that entails. And she never loses who she is or tries to change any facet of her personality/outward appearance to fit in.
Who are some of your favorite heroines in romantic suspense? And why? One commenter will be selected to win a digital copy of Deadly Obsession. I’ll announce the winner tomorrow, August 31, 2011 after 12 EST in the comments section so make sure to check back. 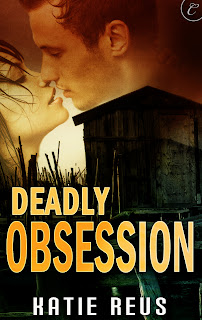 Deadly Obsession now available from Carina Press.
The chilling words of a killer: This is just the beginning…
Ten years ago, Lilly Carmichael left town without an explanation, breaking Braden Donnelly’s heart. The death of her aunt has brought Lilly home–and face to face with memories she thought were long buried. Still getting over a traumatic incident from her work as an NSA agent, Lilly initially dismisses the face at her window as a figment of stress-induced paranoia.
Now the sheriff of Hudson Bay, Braden has spent the last year hunting a sadistic murderer. But his investigation is turned upside down when new evidence indicates that Lilly is the killer’s next target. Determined to protect the woman he’s never stopped loving, Braden must race against the clock to trap a dangerous psychopath—before it’s too late…
A little about me: I’ve been reading romance from a young age (since I discovered my mom’s hidden stash) and the addiction stayed with me into adulthood. I write dark paranormal romance and sexy, fast-paced romantic suspense. Currently I write for Carina Press, Harlequin Nocturne (Destined Mate, October 2011), and in early 2012 the first book in my paranormal series will release from NAL/Signet Eclipse (Alpha Instinct: A Moon Shifter Novel). To learn more about me please visit my website, my blog, facebook or find me on twitter @katiereus.
By Wynter - August 30, 2011

Great post and welcome to the blog! There are too few kick-ass heroines: to me, they either become something exagerrated and implausible like Lara Croft, or they get eased back into a more traditional submissive role by the end of the book :).

My reading's always been less kick-ass and more aha-moment heroines i.e. detectives or police women. I love the recent trend in TV and movies to put women in charge, like Helen Mirren in "Prime Suspect" and Judi Dench as "M" in the Bond movies :). I'm not so sure real life has caught up yet, but you never know.

... and of course (the bit I meant to post before my wayward finger hit "send" too early) these high profile women in law enforcement never seem to have much luck with romance :).

Welcome, Katie :)
I love all those heroines too. I will never forget the eye popping scene in Cry No More. Ugh. And Eve Dallas is just someone you'd love to know in real life.

Hi Katie -- welcome to Not Your Usual Suspects! I love a good kick-ass heroine who is believable. You know, the girl next door who's thrust into a dangerous situation and rises to the challenge. To step away from books for a moment, I liked Sandra Bullock as Angela Bennett in The Net. She's almost agoraphobic, and she's definitely a nerd, but when her life is threatened--not to mention her mother's--she fights back.

It is such a pleasure to see strong heroines appearing in all genres. I think women through time have been tough survivors. With men writing history they portrayed women as they wanted to see them. So you really think women of the Scottish highlands or those in wagon trains were weak? Don’t think so. Great post Katie.

I love kick ass heroines, too.
I'm with you on Cynthia Eden's heroine in Deadly Fear.
Sophie Johannsen from Karen Rose's Die For Me was another favorite.
Great post! Deadly Obsession is an awesome book - congrats on the release.

Clare, yes, that's a pet peeve of mine when their personalities seem to change by the end of the book, like they've had a brain transplant or something. I think that's why Eve Dallas is one of my fave heroines. She's always true to herself, no matter the situation.

Marcelle - that's a great movie! Haven't seen it in years and you're right, she's one of those everyday sort of women but she really rises to the challenge of taking care of herself and her mom.

That's so true, Rita, those women were definitely not weak!

Thanks for having me Wynter :)

Love your list of femmes! I've been disappointed in this season of The Closer - Deputy Chief Brenda Johnson used to be kick ass but this season she's just whiney and off her game. How they're going to do without her and promote Capt.Rader, I have no idea! Other then this season, I would've said Brenda Lee was one of TV's strongest heroines.

I'm still a die-hard Buffy fan. I've been known to pirouette in the kitchen and jab the towels with a spatula. (as close as I get to killing vampires)

Laurie, you're the winner of Deadly Obsession! Please contact me at katiereus @ yahoo .com (no spaces) for a digital copy. (Good call on Brenda Lee Johnson-I love saying her name-and had no idea she was leaving the show)