Adventures in Research – The Humanitarian Village

When most people in the San Francisco Bay area hear the term Fleet Week, they probably think of boats and planes. Last year, I discovered a hidden gem of this annual event. When I saw that the activities included The Humanitarian Village set up by the US Marines and various humanitarian organizations, I knew I had to attend. Not simply out of curiosity, but for research purposes.

What is The Humanitarian Village? It’s a display of various elements that might come into play in the case of an emergency—whether a natural disaster such as we’re seeing now with the hurricanes and earthquakes, a chemical attack, etc. Some of the displays included military medical (and dental) tents, the protective gear and robots used when dealing with explosives, and a massive filtration system that allowed me to drink water pulled from San Francisco Bay. Very cool!

Since one of the secondary characters in my current series, WAR, is a former US military medic, and I’m always having my characters get injured, I spent the most time at the hospital tent. I asked a gazillion questions of the Navy corpsmen and women on duty. Yes, the tent was part of a Marine encampment, but the Navy supplies the Marines with their medical staff.

I found everyone to be extremely friendly and willing to answer my questions. I even received a personal tour from the company commander, including a closer look at the generators. Points to him for not flinching when I asked about the consequences of having my bad guys blow up the generators! 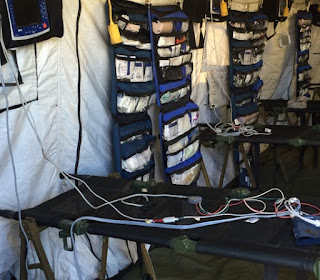 See those pouches hanging on the wall? Each item always goes into the exact same pocket so that the doctors can reach for the item without really have to look at it. When enough pockets go empty, the whole thing is removed and a full one takes its place.

Another secondary character in the WAR series is the team’s explosives expert. So of course I had to get a closer look at the protective gear he might use. 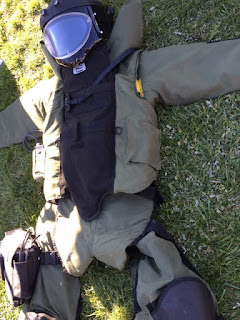 I also talked to the soldiers staffing the mobile kitchen, climbed inside a military ambulance, and stared in fascination at the devices used to detect dangerous chemical or biological agents.

Lesson of the day? It pays to explore all offerings at an event even if you think you know everything that’s going on. You might come across an unexpected research opportunity.

How about you? What fascinating events have you stumbled upon recently?

Vanessa Kier writes action-packed romantic thrillers with an edge. She’s set her latest series, WAR, in West Africa, where she lived for a time. She’s also a Scrivener coach for writers.

Fascinating - and what a great opportunity to ask questions and see the equipment!

My latest adventure might've included axe-throwing at Lumberjack Day. We do love finding weird ways to kill our characters, don't we?

Wow. I had no idea that they had this at Fleet Week. Your pictures show just how much detail you were able to explore. What a treat!

Wow! What a cool opportunity!! Thanks for sharing!