How many of you have ever been burglarized? Your home? Your car? You know that feeling when you open the door and know immediately that something is off/wrong?

It happened to me for the first (and hopefully ONLY) time a few months ago. The outrage, the feeling of being violated… well, let’s just say I was HUGELY, COLOSSALLY pissed and leave it at that, because I could write a novel alone on the anger I still feel.

I will say this. Writing suspense and having done research and interviewing police, detectives and private investigators may have rubbed off on me. 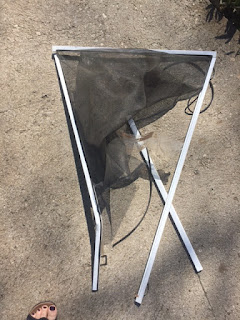 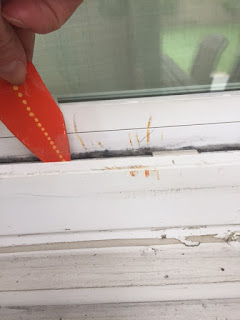 Granted some of that stuff was easy to determine, I’ll admit. Obviously they removed the window screen and used this little orange wooden piece to scratch it out. The window itself was scored with something sharp as if they tried to cut through it. Easy enough to figure out and also leads me to believe they were stoned enough to think they could cut or slice through double-paned glass. (Brilliant? I think not.)

But, how did I know a woman was involved? I won’t say how exactly other than size played a factor in breaking into my house. It was either a woman or teenager. When I was finally able to clean my kitchen after police left, I discovered glitter on my floor. I had cleaned house the day before (Sunday), so it wasn’t left over from anything I might’ve had in the house. No holiday cards or anything that might’ve had glitter on it. Somehow that glitter came with thieves attached.

The one thing I’m always reminded of when plotting a story is to avoid something too contrived with forced circumstances or coincidence. But I’m here to tell you that thieves make mistakes and all those little puzzle pieces to a crime can come together to nail a suspect. (Coincidence happens. That’s why it’s a word in the dictionary.) My case is one of those.

Ten days after the burglary, the police knocked on my door at 10:30 pm. Scared the crap out of me as I was working away in the front room near the front door. The police had just come from a vehicular crime scene and had property with our names on it. When I explained we had been burglarized a week before, it gave our detective more information to work with.  Now we had a name (the car owner, since the driver and passengers ran after the accident) to either potentially go with the sets of fingerprints lifted from my house or at least a beginning as far as having a suspect. (BTW- I should mention the fingerprints lifted from my home have yet to be released.)

Cut to several weeks later and I’m informed of another vehicular incident where a suspect is arrested. What did police find in his car? Our checkbooks and our 27” desktop computer among other things. Now we have an actual person! A name! Trust me, I was a very happy camper with this news…. Until I discovered he was released before they were able to determine that the stuff in his car was stolen! Now I’m pissed again. My first thought was why didn’t they call me immediately? Because they’re busy. I get it, kind of. The wheels of justice move soooo slooowwwwlllyyy. Ugh.

But wait… the story continues. Another couple of weeks, I receive ANOTHER phone call… The suspect was arrested again! For what, I don’t know and the police wouldn’t tell me, but now they have him for my burglary and the good news is he actually confessed to robbing my house.

Honestly, I think the only reason I’m able to write about this is because the man was caught.  The woman who helped him – yes, there was a female involved as I had already figured out – is still at large, but I think her karma will find her one day soon. (We have a first name so it's a start.)

Anyway, my point to all this is that anything can happen when you’re crafting a story and need to pull the ends together to either wrap it up or lead your characters down a different path. What were the odds that the guy who burglarized my house would be arrested a second time so soon after getting out after his first arrest? What were the odds of catching him with any of my stuff or catching him at all?

Once I had his name, my daughter and I did more digging. The Internet is an amazing, scary thing.  We found him all right. And found where he’d sold our laptop computers online. I realize my jewelry is forever gone and that sticks hard with me. Unlike others, I’m not able to just turn the other cheek with this dude. I want him to pay and pay hard for everything he stole from my family and me.  Some areas are just not gray and this is one of them.

I eagerly anticipate my first court date with this fool and I can only hope I have a judge who’ll let me say a few words about the whole ordeal.

I guess the moral of this post is that (hopefully) justice is served when the pieces fall together.

May your pieces always fall together whether it be in real life or your story.
By Dee J. - July 10, 2017

Yes, Dee, Sorry for your nasty experience. I can definitely sympathize, for I, too, have been robbed. And it is a violation of trust, no doubt about that.

My break-in happened several years ago. My bedroom screen had been raised and someone gained entrance through it. They took my handbag with everything in it. The police were called and were able to do little; didn't bother taking prints, etc. I loved that handbag and replaced it with an identical one. A few weeks later, while carrying the replacement bag, I ran into a teen-ager from the neighborhood--a girl--who did a double-take when she spotted my purse. Was she the thief? Probably. Could I prove it? No, but you know what my gut was telling me.

So sorry - I've been robbed twice and it is infuriating.

In my case(s), the police knew- but couldn't prove- who did it, so absolutely nothing happened to the thief. I'm glad your scumbag may have to actually face repercussions.

Oh, that makes me so angry all over again. Your gut was probably right. I wish I could replace all the priceless jewelry taken from my house. Even the beaded necklaces and bracelets my daughter made for me. Things that are worthless to anyone else. Argh...so frustrating. The police were able to lift 15 fingerprints from my house. Still waiting on results although a confession worked for me. Anyway... sorry for your loss and thanks for stopping in.

Aargh!! I'm so angry on your behalf! Twice!? I'm so sorry! That's the worst! I hope my scumbag pays a price. We shall see.
Thanks for popping by.

My one run in with burglars was when I was house-sitting for friends. They'd gone out of town and asked that I check on the place a few times while they were gone, pick up the mail, and just go inside and make sure everything was okay. Probably three days or so into it, I stopped by after work, and pulled up in front, and got the mail, and headed into the house. I knew immediately something was wrong, and a quick walk through confirmed it. The thieves must have heard me pull up, because they'd been heading out the back door with the television and other things, and dropped them and ran, leaving the back door open with all the stuff still there.

Of course, I called the police, and reported it. They took fingerprints, and did the usual questioning neighbors, etc. Me, along with the homeowners, always suspected that it was the teen boys who lived in the house next door, but were never able to prove it. They never did catch anybody associated with it.

But it was scary, realizing they were probably still in the house when I got there.

That was my husband's fear about me entering the house and realizing something was wrong. Instead of walking right back out, I slowly toured the house. It felt empty and it was. I think I would've figured if people were still there in which case I probably would've run right back out the front door. I can't imagine walking in on people during a robbery. That's some scary stuff. Very frustrating that the suspects were never caught. I'm getting ready for my day in court on Monday. Thanks for stopping by!

Damn, Dee, I'm sorry to hear about this. But I'm glad you guys are all safe. The fact that there's an arrest, a confession, and legal progress is amazing. I think so many times, finding a link to the burglars is difficult. Many years ago, I was robbed at gunpoint in my apartment, but the thieves mostly took cash, so there wasn't much for the police to do but take a description.

Hi Nico,
Sorry I'm late to this. I can't imagine what you went through. How scary! Part of me wishes my burglary had been only cash instead of all the jewelry with history and memories. Frankly any robbery sucks. I have zero compassion for thieves. Thanks for stopping by.