As a reader I sometimes break into a cold sweat, and my hands start to shake when I see the word, "series". Am I in for a lifetime commitment? Is it going to go all “24” on me, where each book ends on a cliffhanger? Will I have to go out and buy life-sized cardboard cutouts of the characters because they’ve become family? (Oh, come on, admit that you do that! LOL)

Don’t get me wrong. I do love series books. Heck, I’ve written them as well. It’s just that split-second of panic I feel when I first look at the word, series, and think…should I go there?

This week I have released MIST, book two in the BLUE-LINK series. I’m reluctant to use the s-word in this case. Basically SHADOW, MIST, and coming soon, DUSK, are three books with separate characters who all work for the same company, BLUE-LINK. They are all unique plots with HEAs, and the books could be read in any order you want. There is only one character who can be seen in all three books. Maybe I’ll get a cardboard cutout of her.

So, is that a series? Not exactly.

It would be like saying Nancy Drew was a series. I don’t think any of us read those books in sequence. You read whatever you could get your hands on.

What the heck is BLUE-LINK anyway? BLUE-LINK is a fictional global company run by the enigmatic, Amanda Newton−a woman whose signature accessory is a blue diamond ring. This company assesses the risk factor of starting a business abroad. It takes into consideration civil unrest, health epidemics, and even weather patterns before offering a client its opinion. You will learn in DUSK, the final book in the trilogy, that the owner, Amanda Newton lost her parents in a foreign country because they didn’t do their due diligence. Hence her inspiration. 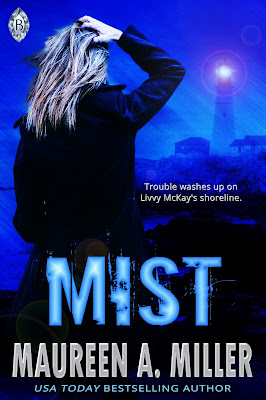 MIST
A mysterious footlocker washes up on Livvy McKay's shore. Minutes after recovering it she is assaulted by an intruder. Wounded and unable to give chase, she is startled by a knock at the front door. A stranger is looking to rent a boat from her business, McKAY'S CHARTERS. Livvy doesn't believe in coincidences. Especially when the stranger is wearing black−just like her assailant.
Jack Morell is a desperate man. After receiving a cryptic phone call from his uncle−a call spiked with the sound of gunfire in the background, he is frantic to locate his uncle's ship. Warned to use discretion, Jack opts to rent a boat from McKAY'S CHARTERS for his search.

A defiant Livvy grills Jack, but deems that he is not her assailant. In fact, she learns that the trunk belongs to his uncle. Together, they uncover its contents, and now they are being hunted.

Someone doesn't want the world to know what is in that trunk. Someone who is well-connected.


Find Maureen at www.MaureenAMiller.com
a Rafflecopter giveaway
By Maureen A. Miller - November 18, 2015

Congrats on the new release! I love your slant on what makes a "series." I hadn't thought about Nancy Drew that way. Hah! And Amanda sounds intriguing!

Congrats on the new release, Gladys! What a fabulous idea for a series. May it sell millions!

Thanks, Anne Marie. Although, I do admit I probably read the Black Stallion books in sequence! LOL

I'll be happy with anything over five, Marcelle! :)

Congrats, Maureen! Stand-alone or series, these books sound great--and an extra wow on that blue cover. (And as both a former Nancy Drew and Young Black Stallion (Farley's son) "series" editor, I say, Go for it!!}

Thanks, Lisa! And that's so cool that you used to do that! (Maureen gushes)

Congrats on the new book. I was thinking of you today. It's very 'misty' here.

Thank you, Rita. I saw the picture you posted on Facebook. 'Misty' indeed!

Sounds awesome. And I never thought about series in quite that way, either. But it all sounds pretty cool! Congrats on the release.

Thanks Wynter. You know, my mom had life-sized cardboard cutouts of Mel Gibson and Bucky Dent. LOL