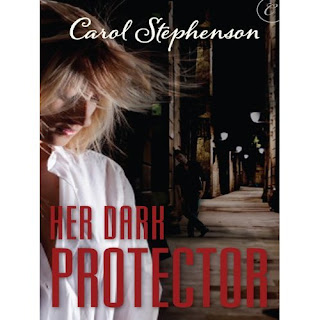 When the idea for Her Dark Protector was a glimmer, I watched an interview of J.K. Rowling. She commented along the lines that at the core of the Harry Potter stories were the various characters' reactions to death.

Can we say writing lightbulb moment?

With Her Dark Protector's central concept of an international secret justice society with unlimted resources stepping in to help the legal system, the core theme is obviously justice.

For the heroine state attorney, her belief system is justice is society's glue.  For the hero who joined  the Justice Alliance after his wife is murdered, justice has failed. 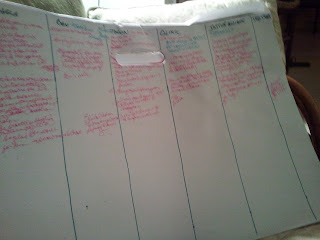 Add a character who believes he is the law, a bad guy who follows the law of the jungle and a second bad guy who is above the law, I had five different character threads to braid action => reaction. If heroine acted in accordance with justice is society's glue then what would jungle law bad guy do?  How would 'I'm above the law' react to jungle law's action? Would the ensuing crisis reinforce the hero's conviction?

I used a sketch pad with columns representing each representation of justice and drew zigzagging lines from viewpoint to viewpoint.  I now use this approach on every book, current one in process.

Have you ever had a writing light bulb moment from something another person said?

I'm not sure I had a light bulb moment, but I definitely have papers like yours all over the place. Charts that I keep squeezing extra boxes into.

All I know is that after reading this post, I need to read your book, Carol!! :)

I'm a fan of anyone who can weave those kinds of threads successfully.

I tend to have my lightbulb moments when I'm in the shower...which is dangerous since water and electricity don't mix...

I have one of those big easels in my office to write crazy plots on. Mine isn’t nearly as neat as yours.
Certainly know what you are saying about one thing clicking. I have been having a terrible problem delivering the emotion I wanted in my story. This morning I decided I wouldn’t write first thing. I’d listen to music, something I haven’t been doing lately, and get some other stuff done. Choose some stuff I hadn’t listened to in a long time mixed with a new sound track. Six thirty this morning the words of second song gave me the emotion I’d been searching for. The third song was the icing on the cake. Why do I forget how powerful music is to me? Needless to say I’ve been layering in emotion all morning.

Oh! And in this story how my H&H react to the death of two people is very important. I am soo excited to be over the emotion hurdle I can’t tell you.

Yes! Great post. I've definitely had them and then figured out the theme of the book--even when it might not seem the theme of the book. In SEA OF SUSPICION the theme is very much about a mother's love--how that relationship affects everyone in the story. I love it when those things come together. :)

Terrific post, Carol. I think a lot in the shower-hard to keep a pad and pencil there, but I do have the one by the bed. Sometimes a photo will give me an aha moment that solves a problem.

Love your diagram, Carol. I can't think of an "ah-ha" moment off the top of my head... (And now, Ah-ha's "Take On Me" is playing in my head LOL)... but I love your braiding idea. I've recently learned to put each scene on an index card, have them laid out by POVs, and I can see how each character progresses throughout the story, and where the gaps are. Hard to explain here, but it works for me! :)

And Rita - I can hear the excitement and triumph in your post. Yay on tapping into that emotion. Sounds like it'll be a powerful story!

Great post, Carol. I really like the idea of braiding. Anne Marie, I use index cards, too! It's a great visual cue for me to see at a glance if I've given enough weight to certain characters. Unfortunately, I never know the theme of my stories until *after* I've written them.

Thanks, Maureen! There's never enuf room for all the boxes. :)

Hmm, JB, may be a wet erase board for the shower
. hehehe. :) Carol

Rita, you go! It's amazing how music can help with the creative process.

Hmm, note to self. Get both JB and Elise wet erase boards for the shower.

I started out with index cards too, Anne Marie and Marcelle, but then gravitated to using a sketch pad. I assign a color for each main character and then use purple for plot points. Since I'm a visual person, the colors alone will signal when a character has had too little or too much 'stage' time.

Great post! My lightbulb moments usually come when I'm walking with the dogs.

I use index cards. Hundreds of them. All colour coded. Needless to say, my office is a mess. :)