The Romance of Jessica Fletcher

Hold on to your Liberty scarves, everyone. Guess what? I just realized I have at least five things in common with my favorite TV and book detective, Jessica (J.B.) Fletcher. And they’re pretty much indisputable:

I was in my twenties, living in New York City, when the long-running CBS show Murder She Wrote first hit the air. I worked in publishing—as an editor, not an author. But even then, I wanted to be just like Jessica someday. 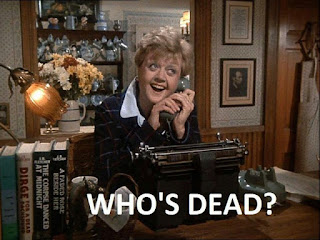 First and foremost, of course, J.B. Fletcher was a super-successful mystery novelist. A fictional one, yes, but for some reason I preferred to think of her as a living, breathing queen of suspense like another of my idols, Mary Higgins Clark. Jessica was smart, well-read, and considerably more observant than I, with Holmes-like powers of deduction and a keen sense of intuition, especially when it came to human nature. Not to mention, Jessica was also compassionate, kind, and committed to justice for all. What could be more important than that?

Plus, she knew her way around a Royal typewriter (I was at least three months into my publishing career before I finally mastered the IBM Selectric). Eventually she graduated to a computer and Windows 3.1 (probably more easily than I did). Oh, and here’s another thing J.B. Fletcher and I have in common: We both work at our kitchen tables. 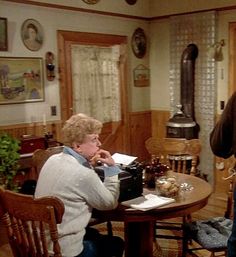 Which brings us to Jessica’s hometown of Cabot Cove, Maine. Who wouldn’t want to live in a coastal Mayberry? We won’t even talk about J.B. Fletcher’s irresistibly charming Victorian house. It wasn’t until fairly recently that I was disappointed to learn those heartwarming, New England-y shots of “Cabot Cove” were filmed in Mendocino, California. The actual house is there, too: the present Blair House Inn.

But the interior of 698 Candlewood Lane? Originally, it was a set for The Best Little Whorehouse in Texas. (Ouch.) I guess that means the cozy kitchen wasn’t real. Well, no mind. Here’s another thing J.B. Fletcher and I have in common: We both drink tons of tea. Hers hot, mine iced. And I do have some equally lovely china cups and plates. A few may be on the chipped side.

I can’t say that, back in the eighties, I envied J.B. Fletcher’s practical-but-stylish, matronly-but-feminine wardrobe. But as I’ve gotten older, and since I’m a New Englander, I share her fondness for classic tweed blazers and warm sweaters that nicely skim the hips. I haven’t grown into those scarves yet, though.

While always humble, Jessica was highly popular and something of a celebrity in Cabot Cove. Not quite as many people have even heard of me in my own tiny town. More of them are starting to recognize me, though, thanks to the yellow knit, crime tape scarf I got for Christmas this year. But if any of my neighbors or our local constabulary knocked on my non-Victorian door to ask for help solving a murder, I’d probably lock myself in the basement and cower. Guess that was another thing I admired about Jessica: her courage. Even with a suspect threatening her life, which was practically every episode, she stayed cool. 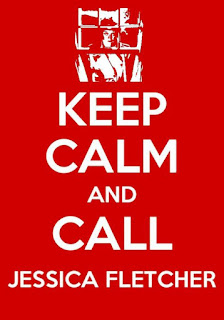 As a prolific and highly professional writer, Jessica was usually on some kind of deadline or other, but she was a champion multi-tasker—and quite good at saying no, unless someone’s life was at stake. (Maybe not one of my strong points. Sigh.) And she did travel often, with all those extravagant dinners and speaking engagements and promotional trips, courtesy of her publisher.

Ah, the rock-star writer’s life. Those days are long gone, I’m afraid. On the other hand, in those same good old days, Jessica wrote as J.B. Fletcher—in part to preserve her privacy, perhaps, but more likely to downplay the fact that she was a writer who happened to be a woman.  In quite a few of those Murder She Wrote episodes, Jessica and the other female characters encounter incidents of sexism that will make you cringe. Not because they happened back then—but because they still do. Through it all, though, Jessica remained above the fray.

J.B. Fletcher would probably have a few things to say about all the changes in publishing today. But she was always a pragmatist. She didn’t always approve of her book covers, or the plot changes a new editor requested, but she let her stories do the talking. Clearly, Jessica loved her work, and she focused on creating the best books possible, backed by solid research. Yes, she watched her sales figures and general trends, but bottom line? She kept her fingers to the keyboard.

Jessica, if you’re reading this, you may be concerned I misled readers a tiny bit by using the word “romance” in my blog title. Yes, I know you’ll always be true to your late husband, Frank Fletcher, and that you and Dr. Seth Hazlitt were just friends, and ditto that guy from Scotland Yard. It wasn’t a marketing ploy, or anything. I meant “romance” in the larger sense, you see. Um…Jessica? 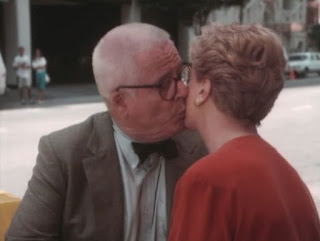 Well, anyway, I’ll keep working on being more like you. In the meantime: Next, on Murder She Wrote (theme song here)…

Haha - loved this. Are you sure you aren't Jessica Fletcher? :D I love the captioned picture "Who Died?" LOL

Loved the blog, Lisa. Remember the program and you brought up a long forgotten memory of a little French restaurant on 56th Street that always had a bowl of radishes on the table.

Elise, bet those same radishes were there for years! :-)

LOL! This is brilliant. And I'll bet you rock the yellow crime scene tape.

Great post, Lisa! I still have a soft spot for Jessica, but honestly, I wouldn't want to live in Cabot Cove. Too many murders, there.

Everyone, I've just learned that Renee Paley-Bain, who collaborated with her prolific author husband Donald Bain on the Murder She Wrote book series starting with Murder in a Minor Key in 2001, sadly passed away very recently. http://www.examiner.com/article/in-remembrance-ren-e-paley-bain

Excellent post, Lisa! It brought back memories of kinder, gentler days (with the occasional murder or two).

What a wonderful tribute to a great show!Loved it.

Great post, Lisa Q! You made me smile. Have you checked out the Mrs. Fletcher's Closet blog for fashion tips? :-)

I loved this post, Lisa! I was a big fan of MURDER, SHE WROTE as well. I always had to leave the room when newbies asked Jessica to read her manuscript for them. Even then I knew that was just wrong! I always laugh when I think about the second sheriff in Cabot Cove complaining about the murder rate of his town. It was terrible for locals and even worse for visitors.

Kristin - I was just thinking of that episode. The new sheriff pulls her aside and asks, "What's the deal? I came here to get away from all the murder!" Lisa - that "Who Died?" meme is awesome. Wonderful post. I fall asleep to JB every night on the Hallmark Movie channel.

Vickie, I did check out the Mrs. Fletcher's Closet blog, hoping for tips. Who would have known Jessica had such a pricey designer wardrobe?

Kristin and Mia, You know, the murder rate in Cabot Cove just didn't bother me that much. Kind of like how Nancy Drew never aged...Did see a photo of the town "sign" that listed the dwindling population numbers--all the way down to only Jessica and the Sheriff left!

That is perfect, Lisa!

Thank you so much for the kind words, everyone! And I appreciate the share, Judy.