Starting in the middle?

I recently read about a method for writing a novel that involves starting in the middle, at the "mirror moment," when the hero or heroine is deciding who they are and what they have to do. Ms. Skeptical here thought that sounded like a strange way to go about starting a novel, so I decided to see what was right smack in the middle of one of my books. As it happens, the trade paper version of Son of the Enemy was released today, so I grabbed it out my box of author copies and turned to the very middle of the book. 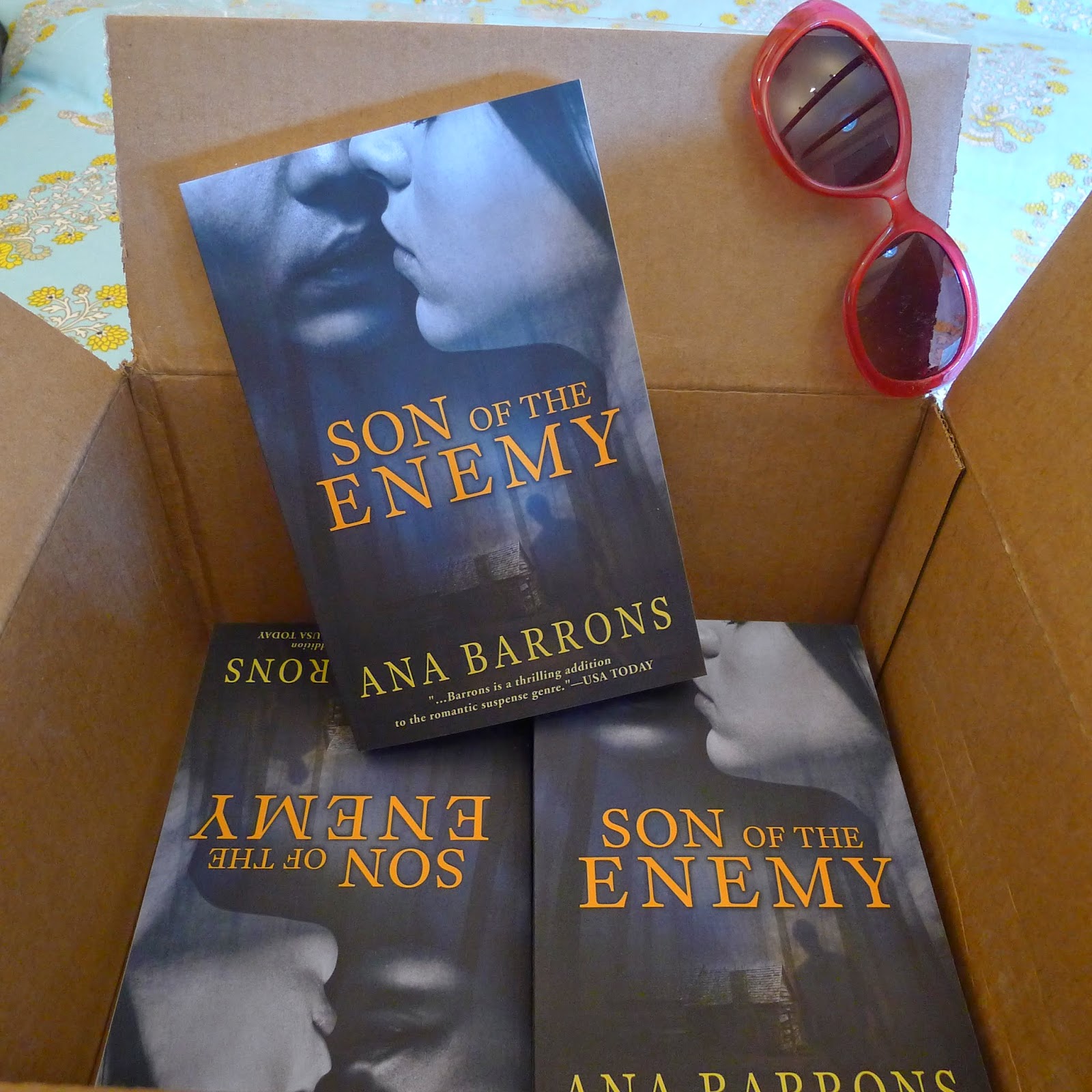 (This is a teaser, but not really a spoiler…)

John is an FBI agent on leave, spending time with Hannah, the daughter of the woman his father was convicted of murdering twenty-three years ago. He received an anonymous note, telling him 6-year-old Hannah was the only witness to the crime, and the only one who can possibly lead him to the real killer. John lies to Hannah about who he is, hoping she'll let him get close enough to probe her earliest, most horrific memories.

Before John came along, Hannah had been dating Bradshaw, a wealthy businessman with mob connections. Unbeknownst to John, the FBI sent an agent to recruit Hannah's help in taking down her former lover. The agent spotted John, and now his boss, Walter, has called him away for an urgent meeting.

Walter has kept John waiting more than two hours, and is suspiciously understanding about the fact that John has been keeping company with Hannah. John learns about the Bradshaw investigation and asks Walter what the FBI wants from her.

"So what is it exactly that you want her to do?”
“Drop in unannounced during a meeting he’s having with some persons of interest and place a bug on him.”
John froze. “A bug?” He knew how hard it was to get a judge to agree to let them bug a residence or a person. They had some serious s**t on Bradshaw, then.
“It’s a nanotech device. Tiny. Won’t activate until she leaves, so there’s very little risk.”
Like hell. “I’ve never heard of a device like that.”
Walter shrugged. “It’s brand new.” He sipped his coffee. “So, what would you have done if she’d told you about it? Would you have played the protective boyfriend?”
“If you’re asking if I would stand in the way of a bureau investigation the answer is of—” Suddenly Walter’s words sank in. “What did you say?”
“I said—” Walter hesitated for a fraction of a second, and John knew. “What would you do if she told you—?”
Son of a bitch.
“No,” John said. “That’s not what you said. You said, ‘What would you have done if she had told you.’” He leaned forward, careful to keep his hands under the table so he wouldn’t be tempted to put them around Walter’s neck. “That means it’s a done deal. She agreed to do it, didn’t she? Is that what you wanted to tell me? Are you ordering me to back off?”
Walter laid his forearms on the table and leaned toward John. “You still haven’t answered my question. I think I know the answer, though. I think you would have tried to talk her out of it because you’re involved with her and you’ve lost your objectivity.” He stared hard at John. “I’m right, aren’t I?”
“I haven’t lost my objectivity,” John said in the calmest voice he could muster. “But maybe the FBI has. What if she succeeds? You don’t think Bradshaw’s going to realize it was Hannah who brought the bug in?”
Walter sat back. “Bradshaw cares about her. He wouldn’t hurt her.”
John was incredulous. “You don’t know that. And what about all the other guys in that meeting? Organized crime doesn’t like witnesses, Walter. They hunt down witnesses and kill them. Sometimes they torture them first. You think it’s objective, not to mention ethical, to put an innocent woman in that position?”
“[We] explained it to her. She went in with her eyes open. If there’s a problem, we can put her in the witness-protection program.”
John nearly lost it then. “Oh, that’s just great. She gets to give up her life, her family, all her friends, and start over somewhere else. And you—” He stopped and gripped the edge of the table. “What do you mean, ‘She went in with her eyes open’? Went in? Are you saying—”
It all fell into place in that instant.
“Holy f**k. You kept me here waiting for you so I’d be out of her way. Jesus Christ. She’s there right now, isn’t she?” When Walter didn’t answer, John stood and leaned all the way across the table so he was in the SAC’s face. “Isn’t she?”
“It was the best way,” Walter said.

John is a devoted FBI agent, even though he's hidden some things from the bureau in his efforts to free his father. Now he's at a crossroads: Does he interfere with an ongoing FBI operation or leave Hannah to take her chances in a house full of dangerous men? If he interferes, he'll forfeit his career and blow his cover with Hannah, his only lead in solving the crime that put his father in prison. If he doesn't interfere, Hannah could be hurt—or possibly killed.

I'm fascinated that this moment happened right smack in the middle of my book. It's the right place for it, and it's a game-changer. Maybe I'll take a stab at plotting my next book starting in the middle. How about you? Have you ever started a project in the middle?

Great excerpt! I hadn't heard of this technique and the "mirror moment" but it sounds intriguing. (And I'm always up for a new technique to add to my bag of tricks.)

For me, I wonder if it would be tough to start in the middle. Sometimes I don't fully "know" my characters or plot until I've written at least a third of the book. However, the middle is where I struggle, so maybe I should give this a try. ;)

Hey Ana,
I haven't heard of plotting from the middle but I have heard of writing the "good parts first."

Those important moments of change are sometimes fun to start with--and help you understand what you are writing toward.

I'm selfishly glad to know you two weren't aware of this method either -- I always figure I'm behind the curve. ;) I think I'll try plotting from the middle first and then try writing the scene. Like you, Anne Marie, I don't feel as though I know my characters well enough at the beginning. But maybe doing something like this would kickstart the knowing.

I feel like I KNOW the beginning middle and end before starting the book. I'm just writin the fill in.
Don't think I could start in the middle.

You must be a better plotter than I am, Rita. I know the beginning and end and have an idea of what happens in the middle, but I always have trouble with the "sag."

I generally have the turning points plotted once I turn a fuzzy 'what if' into a 'maybe it's a book.' I'm not sure starting in the middle would work for a mystery/suspense since there's so much set up to keep the tension/pace/plot/subplots moving.

Love your excerpt and that the game changer falls right where it should, Do you think you could've set everything in motion to reach that point if you'd started there?

Good question, Cathy. Probably not, particularly if I'd tried writing it. Plotting from the middle could be an interesting exercise, but producing a fully realized scene like this one before I've written anything else, not likely.