We're so grateful for our readers and love connecting with them. So we're excited to bring you this marvellous giveaway of Romance, Suspense, and Mystery E-books for the holiday season. Hopefully you'll have plenty of time to read them if you win :).

ALL YOU HAVE TO DO is comment on this blog post about which romantic / suspense / mystery book you're looking forward to reading - or re-reading! - over Dec/Jan. It can be from one of the Not Your Usual Suspects authors, or any other author. We love to hear about YOUR favourite reads.

Then we will draw the THREE prizes on Dec 26, with a random generator from all the comments.
Check back then to see if you've won. And the prizes are????

All these E-books are included in the Grand Prize - click the links to find out more details about each title and author: 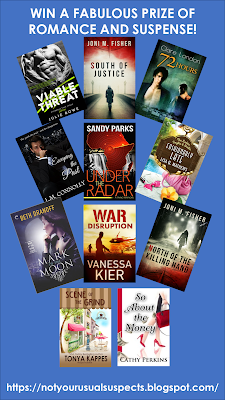 Viable Threat by Julie Rowe
Special Forces soldier and medic Walter River would give anything to snatch more than a few seconds of down time to see if he can rattle the no-nonsense and incredibly hot Dr. Lloyd he's protecting, but dodging explosions, snipers, and student radicals who've unleashed a lethal bio-engineered microorganism have made that almost impossible. Maybe he'll get a chance—if he can figure out how to keep them both alive.

South of Justice by Joni M Fisher
Terri Pinehurst has achieved the financial, social, and personal goals in her life, except for a lifetime kind of love. When she meets FBI Agent Blake Clayton, he exceeds her hopes and wakes up dormant passions in her. The day they marry at Blake’s family’s ranch in North Carolina, fishermen find bones in the nearby river that lead to an investigation into the death of a missing neighbor.

72 Hours by Clare London
Tanner Mackay and Niall Sutherland were once far more than just fellow intelligence agents. But then a mission went horribly wrong and everything fell apart, sending Tanner into hiding and splitting the team and their affair wide apart. Now an unknown traitor is threatening the team, and their ex-boss is determined to reunite them before it’s too late.

Escaping the Past by Lynne Connolly
Jade has come from England to New York to find work and to live incognito, after a message from her brother, Miles, who works for a shadowy organization called the Increments. Gary is part owner of the store where she works, but despite their different social status, Jade and Gary have an instant connection. When Jade is put in danger, Gary is forced to act to save her, even if it means he risks his life protecting the woman he loves.

Under the Radar by Sandy Parks
Helicopter pilot Joni Bell believes her life is once again under control after a failed covert rescue mission two years ago cost the life of a dignitary’s child. Out of the US military and relocated to South Africa, she test-flies a prototype Special Forces craft unaware her past has already caught up. Do you enjoy thrillers with unique settings and adventure? Like a strong female protagonist who is vulnerable yet smart enough to see team work gives her the best chance to succeed? Then you will enjoy Sandy’s Taking Risks series, which starts with Joni and wildlife manager Ian Taljaard in UNDER THE RADAR.

Fashionably Late by Lisa Q Mathews
When a classy fashion-show luncheon turns deadly, the Ladies Smythe & Westin are back on the case. It's murder she wore… Sporting a chic Florida outfit and designer baubles, seasoned model Angelica Downs belonged on the runway…not in the morgue. Summer Smythe and Dorothy Westin are determined to retrace her final moments—right up to her desperate plea for help. The Ladies pin their suspects down to just a few questionable characters. But why would anyone target such a seemingly sweet, lovely woman?

Mark of the Moon by Beth Dranoff
In this first book in a wildly addictive new series, a battle begins and one kick-ass female bartender turned demon fighter is ready for war. I'm Dana Markovitz. And my world is shifting. My experience with the paranormal community was a good one, pouring shots in the creature-friendly pit stop where I tend bar. Until last night. Worst. Date. Ever. A hookup with a vampire ended in a scratch from a jealous were-cat. Surprise! I caught a cat-shifting virus. Tell you one thing. There's no way I'm being put down like a feral stray. I may not know who to trust, but I'll be damned if I'm not fighting back. Hell, my claws are already starting to show.

War: Disruption by Vanessa Kier
He’s been trained for war. No one prepared him for love. Black ops agent Max Lansing believes a powerful official within the United States military is protecting international arms dealer Heinrich Dietrich. Max vows to hunt Dietrich down, even if it means going rogue. Adrift after an attack destroyed her career and her self-confidence, former principal ballerina Emily Iwasaki has come to West Africa as part of a dance tour to raise money for war orphans. When rebels attack Emily’s tour group, Max steps in and saves her. As the days tick down to the arms deal, and all of Max’s attempts to get Emily to safety fail, they end up racing through the jungle steps ahead of the rebels. But when it comes down to saving the day or saving his girl, there’s really only one choice.

North of the Killing Hand by Joni M Fisher
North of the Killing Hand is the second book in the Compass Crimes Series and a prequel to South of Justice. A finalist in the 2016 Royal Palm Literary Awards Competition, and a finalist in the 2017 National Indie Excellence Awards in the suspense category, this story has overlapping characters from South of Justice. After Nefi Jenkins witnesses her parents' murder in Brazil, she bonds with her American rescuers. They bring her to the U.S. to live with her relatives where she must adapt to a radically different lifestyle. She dedicates her life to law enforcement, in large part to impress Vincent Gunnerson, one of her rescuers. As an adult, Nefi will be forced to choose between the rule of law and the temptation of revenge.

Scene of the Grind by Tonya Kappes
Scene of the Grind is the first in USA TODAY bestselling author Tonya Kappes' new A Killer Coffee Mystery Series. The series takes place in the cozy southern fictional tourist town of Honey Springs, Kentucky. Roxy's life couldn't be better. Business at her coffee shop, The Bean Hive, was booming, she's reconnected with special people from her past, including her first teenage love, and visits The Crooked Cat book store, which is still her favorite shop in Honey Springs. When she discovers the beloved book store owner murdered and her Aunt Maxi is the number one suspect, Roxy has to uncover who is behind the murder not only to save her shop, her aunt, but her life.

So About the Money by Cathy Perkins
When Holly Price trips over a friend’s dead body while hiking, her life takes a nosedive into a world of intrigue and danger. The verdict is murder—and Holly is the prime suspect. Of course, the fact that the infinitely sexy—and very pissed off—cop threatening to arrest her is JC Dimitrak, Holly’s jilted ex-fiancé, doesn’t help matters. To protect her future, her business...and her heart...the intrepid forensic accountant must use all her considerable investigative skills to follow the money through an intricate web of shadow companies, while staying one step ahead of her ex-fiancé. She better solve the case before the real killer decides CPA stands for Certified Pain in the Ass...and the next dead body found beside the river is Holly’s.

I am a fan of Joni M. Fisher and will be re-reading her books preparing for the next in the series. I also love to discover new authors, so winning would be wonderful!

I just got the I Spy - three novellas bundle by Josh Lanyon in its shiny new cover. I Spy is one of my favorite pairings from this author so I’ll be looking forward to reread that in one go, perhaps end of December. That saying, there are a few of Josh Lanyon’s books I reread anyway almost every year, among others are Fair Game and Holmes/Moriarity series.

I am a fan of Julie Rowes books they are so good! Id be happy with other books as well! I just love to read it relaxes me! U need it this time of year so winning would be great!

Kathi Daley's The Christmas Letter and her Finding Justice

I really want to read the Scene of the Grind. It looks really good.

I'm looking forward to re-reading "Scene of the Grind" All the books look great. Thanks for the chance!

Scene of the Grind, love Tonya


I am looking forward to reading Viable Threat by Julie Rowe

I think, Mark of the Moon by Beth Dranoff, looks like an interesting fun read! All the books look amazing though. Thank you for the chance!

I am a huge Tonya Kappes fan and try to read her books as soon as they are available. I have not yet read Lisa Mathews Fasionably Late or So About the Money by Cathy Perkins so those are on my want to read soon list.

I'm looking forward to reading "Scene of the Grind" by Tonya Kappes.

No Regrets by Julie Moffett and Small Town Trouble by Laura Benedict are at the top of my TBR mountain.

I am going to start a Cathy Perkins book,So About the Money! She is a new author to me and I am so excited to try a good read.

I'm looking forward to reading another Tonya Kappes book.. and Fashionably Late by Lisa Matthews sounds like a fun read! I'm excited to try out some new authors!

Iam looking forward to reading CLAUS: RISE OF THE MISER by Tony Bertauski!

I bought myself The Big Book of Christmas Mysteries and I have it wrapped up under the tree. I plan on spending the week between Christmas and New Years snuggled up with it while I munch on goodies!

I really want to read The Girl Who Lived by Christopher Greyson! It sounds so incredibly amazing!

Any boo by Tonya Kappes is a winner

I am looking forward to reading Scene of the Grind by Tonya Kappes. Thank you for the opportunity to win.

Scene of the Grind by Tonya Kappes. I love Tonya's books.

Rereading No One Lives Twice!

Musings from a Tangled Mind. said...

Happy Holidays to everyone.

All sound awesome. I haven't read any of these authors yet but would love too. Thanks.

The winners are announced at this link, and brief details also below:
https://notyourusualsuspects.blogspot.co.uk/2017/12/winner-of-prize-draw.html

Congratulations TINA H! Please let me know your preferred ebook format, and I'll arrange to have the books sent to you.

Please let me know your Amazon account email address and I'll get the gift cards arranged.

Thanks to everyone who visited our blog and entered the draw. It's wonderful to hear from so many of you!