I'm about to start a new romantic suspense novel! I've got my notepad and pen handy for plotting and character development and several hours left of the day with no pressing obligations. The laundry is done, husband busy with his own projects and I'm… 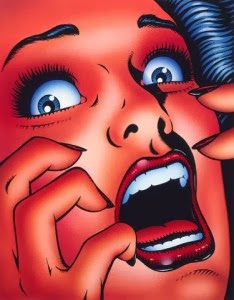 What if I can't think of anything to say? What if my characters fall flat, my plot is insupportable, there isn't enough conflict? What if my agent hates it?

Or what if it gets published and every review is negative?

I don't know why I go through this every time I write a book. I've written several and had three published so far, so it would follow that I'm somewhat confident. And I am…somewhat.

This is my first try at a trilogy. I've got the first book written and almost half of the third—which I thought was the second, but realized it needed to be the last book. There are three siblings in the Hunter family: Nathan is the oldest, and his book is written. Rick is the middle child and Kat is the youngest.

Nathan is a wounded former cop turned P.I. who specializes in finding missing kids. He takes on the search for a senator's son, which leads him to the boy's stepsister—a woman with a past who doesn't want to be found. In order not to spook Sophie when he meets her, he doesn't tell her he's tracked her down to find her stepbrother, all of which sets up a disastrous chain of events for Nathan and his family.

Here's an excerpt from Nathan's book, which I'm calling Trust No One:

In the bedroom, Sophie could hear Nathan's voice very faintly from the powder room off the kitchen. Either he was talking to himself or he was on the phone.
In the bathroom. On the phone.
Her gut seized.
Please, God, don't let him be one of them.
A moment later his silhouette filled the bedroom doorway and she was sitting on the bed in the dark, wrapped in a towel, frozen with doubt and fear. He unbuttoned his shirt as he walked over to the bed, but didn't take it off.
"Are you okay?" he asked.
"Of course," she said. How could he tell there was something bothering her? He could barely see her. "Why do you ask?"
The bed creaked when he sat down beside her and reached out to stroke her hair. "I can feel the tension rising off you, that's why."
Tell him to leave. Tell him you changed your mind.
But he was big and warm and smelled so masculine, and he'd already given her a taste of what it would be like. And there was the way he smiled and the way he was with Max…
"I thought I heard you talking to someone," she said, hoping he couldn't hear the tremble in her voice. "Were you on the phone?"
His hand didn't falter. "I called my little sister, Kat. I spoke to her yesterday, and she didn't sound so good. Her husband's kind of a schmuck."
Very smooth. But was it the truth? "Isn't it a little late to make a phone call?"
"Kat has trouble sleeping," he said. "Especially when her husband's on the road, which he is now. She's alone with three kids, including twins not much older than Max."
"Oh." She couldn't think of what else to say. She had to make him leave now, before he touched her again. "Nathan—"
"What are you afraid of, Sophie?"
She closed her mouth. If he were one of them, wouldn't he have arrested her by now? Or was he planning to screw her first and then pull out the cuffs?
"Talk to me," he said softly. "You can trust me, I swear. Get it off your chest."
Oh, God, how she wished she could tell him everything and make him understand. But what if he was just manipulating her into confessing? No. She couldn't trust him. Couldn't trust anyone.
"I was just going to say that I think we're… moving a little too fast."
He nodded. "I'm happy to go very, very slowly. Whatever you like."
He bent down and planted a kiss on her bare shoulder, and every nerve ending in her body lit up. Her breasts swelled with need, as did the hard nub between her legs. Was it so bad that she wanted this man, even if…
No, he wasn't one of them. He couldn't be.

I love to hear from readers. If you liked this excerpt and would like to read one of my current ebooks, either leave a comment or email me at: ana@anabarrons.com, let me know which book you'd like (WrongfullyAccused, Son of the Enemy or Betrayed by Trust) and in what format and I'll send you a copy. Easy as that!

I'm sure you'll do great with the trilogy. Personally, I love reading trilogies or connected books, which must be why I have the opposite problem - it's hard for me to write a single book. Each book in my series stands alone, but I like creating a world I can come back to. ;)

Thanks, Anne Marie! I like reading connected books as well, for the same reason. I just hope I can pull it off.

Your characters are so real as is the tension. Good work.

Ana, You struck a chord. I'm thinking of a new book too and have had the same self-doubts. Guess it comes with the writer's territory.

Spent the morning watching the Olympics ice dancing. It was electrifying. You think trying something daring--like skating in front of the world or writing a book always takes guts?

God that sounds preachy, so yank me off the ice.

I shudder to think what it would be like to skate in front of the world! I'm in a constant state of anxiety watching those people perform. I do think it takes guts to write a book, although those who've succeeded wildly may get beyond the terror phase. I used to completely flip out when I had to do any sort of public speaking, but I've moved at this point beyond terror to a somewhat lesser state of anxiety. ;)

Hello! Isn't self doubt the number 2 requiremnt of being a writer? You know like 1)Must write. 2)Must have self doubt. 3) Must have Tequila.
Am I doing this wrong?

Great excerpt, Ana. I loved it. I have doubts EVERY SINGLE TIME. And I'm almost finished my WIP and I still have doubts!!! I do think it is normal. Ugh.

Oh, tequila? I thought it was white wine! So I was doing it wrong! ;) It's nice to know I'm not alone in freaking out. Thanks for the kind words about the excerpt. Wait'll you see what happens next! (After the sex, of course…)

Oh I think we can all relate to that what if it was all a cosmic joke and I have to turn in this book and it's going to be terrible...Breathe.
Fab excerpt.